(Trigger warning: this is satire intended to lampoon the two cultures currently dividing academic politics. It is also a fully playable social deduction game in the tradition of Werewolf, Mafia, The Resistance, and Avalon. In fact, Secret Sartre is a straighforward re-theming of the upcoming game Secret Hitler by Max Temkin (2016). Re-theming is a euphemism for theft, but no infringement of intellectual property is intended. Since this satire is about postmodernsim, intent is all that matters. The print-and-play edition of the original, including the rules, is available on-line; Secret Hitler is an extremely well-designed game with brilliant mechanics and a splendid theme.)

In Secret Sartre, the faculty members of an unnamed university department battle for ideological supremacy. A fragile alliance of upstanding rationalists, logical positivists, empiricists, liberal humanists, scientists and other fetishizers of the Enlightenment must work together to stem the rising tide of postmodernism. Watch out, though – there are closet postmodernists among you, and someone is Secret Sartre.

At the beginning of the game, each player is secretly assigned to one of three roles: Science, Postmodernism, or Sartre. Sartre plays for the postmodern team, and the postmodernists know who Sartre is, but most of the time Sartre does not know who his fellow postmodernists are. The Scientists are far out on the autism spectrum and don’t know who anyone is.

Give each player a pair of cards, one identity and one allegiance. Both of these cards are secret and may never be shown to any other player, except (i) if Sartre is fired he immediately reveals it, ending the game in victory for the scientists, or (ii) if the Department Head investigates the loyality of a faculty member enacting the Diversity Training postmodern policy.

The composition of faculty is given by the following table:

Here are the faculty members’s identities. Except for Sartre, none of the names have any bearing on the game.

You also need an allegience card for each player. This is the cards that you show when you’re under ideological investigation from the Department Chair. You need 4 po-mo cards (for Derrida, Foucault, Rorty, and Sartre), and 6 science cards (for the rest). 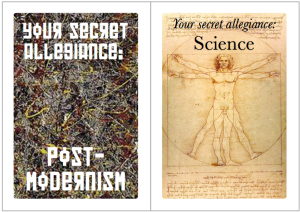 Put each pair of cards in a separate envelope, shuffle, and deal.

Each player looks at their identities, making sure that nobody else sees it. The player with the highest academic degree in real life is the first Department Chair candidate. If several players hold the same degree, spend some time discussing the merits of the degree-granting institutions, possibly using a recent ranking of universities. If this does not resolve the issue, another player with an MBA can break the tie using the player’s h-index.

Everybody close your eyes and extend your hand into a fist in front of you. Sartre, keep your eyes closed but put your thumb out into a thumbs-up gesture. All postmodernists who are not Sartre, open your eyes and acknowledge each other. Postmodernists, take note of who has extended their thumb – that player is Sartre. Think about the relationship between the signifier and the signified. [Take a long pause] Everyone close your eyes and put your hands down. Everyone can open your eyes. If anyone is confused or something went wrong, please tell the group now.

Secret Sartre is played in rounds. Each round has an Election of new faculty leardership, a Faculty Meeting to enact a new policy, and an Executive Action where the Department Chair exercises his or her power.

Each round, faculty members elect a new Department Chair and Head of Studies. These are shown as two placards (cut them out and fold as shown.)

If faculty rejects three proposals in a row, the student representatives take matters into their own hands. Student policies are completely random: Reveal the policy on top of the Policy Draw Deck and enact it. Any power granted by this policy is ignored, but all players become eligible for Head of Studies for the next Election. Reset the Election Tracker after a policy is enacted by the populace or a government is successfully elected.

The Department Chair draws the top three cards from the Policy deck,
looks at them in secret, and discards one Policy face down into the discard pile. The Chair passes the remaining two cards to the Head of Studies who looks in secret, discards one Policy card face down, and enacts the remaining Policy card by placing it face up on the corresponding track.

This is the track for the scientist’s policies:

None of these policies has any effects on game play or real life, their role is only to mantain the status quo of male white dominance of Academia (includig Marie Curie as a token woman). The scientists win after enacting the fifth rational policy.

Depending on the number of players, one of three boards is used for postmodernist policies:

Postmodern policies may have effects on game play, see below.
The sanctity of the faculty meeting is of the utmost importance! Once it begins with the Head drawing three Policy cards, faculty members stay silent until a policy has been enacted. Discarded policy cards may never be revealed; you must rely on the word of faculty leadership, who are allowed to lie.
If there are fewer than three cards remaining in the Policy deck at the end of a legislative session, shuffle them with the discard pile to create a new Policy deck. Unused policies should never be revealed, nor may they simply placed on top of the new Policy deck. If the government enacts a rational policy or a postmodernist policy that grants no power, begin a new round with a new Election. If the government enacts a postmodernist policy that grants power to the Department Chair, proceed to the Executive Action.

Whether by fate or choice, the faculty meeting may have adopted a postmodernist policy, moving the department away from excessive reductionism and granting the Deparmental Chair new powers to enforce collectivist fidelity. The Departmental Chair must enact the power granted in this round. Look at the Postmodernism policy track to determine which power, if any, has been granted.