The European Association for Theoretical Computer Science has around 1000 members, including many European TCS researchers and everybody who attended conferences like ICALP and ESA in a particular year. Traditionally, EATCS has had a close relationship to scientific publisher Springer, who publishes the proceedings of EATCS’s “flagship conference” ICALP.

A recurring theme at the EATCS general assembly meetings for the past many years has been the publication model for ICALP. Should “we” continue with Springer, or move to an open-access publisher like LIPIcs? After considerable deliberation, a ballot among EATCS members was held in late 2011.

I have been absolutely thrilled that the EATCS council decided to send this question to its members. Well done. I want to see more of this.

Unfortunately, the outcome is not what I would have hoped. The EATCS council required a quorum of 25% of EATCS members for the ballot to be valid. I think this is a reasonable requirement – the ICALP publishing model is an important decision that should be safely moored. 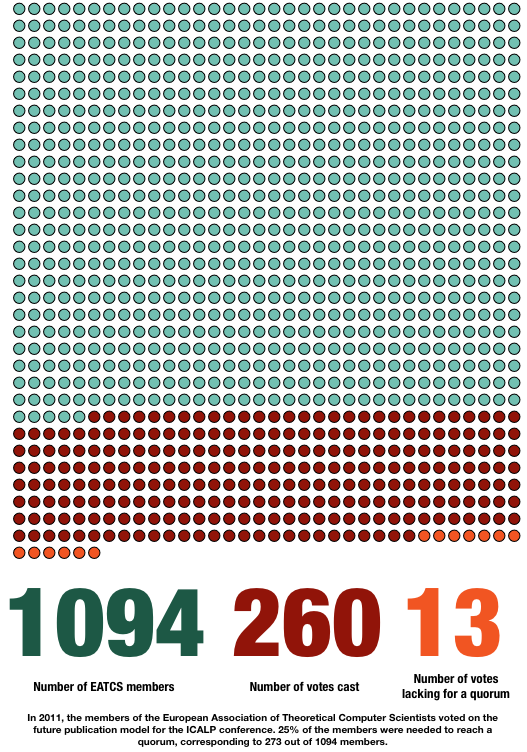 I am, of course, somewhat miffed that 834 EATCS members don’t seem to think that the way their research is published is sufficiently important to execute three or four mouse clicks to make their voice heard one way or the other. After all, it’s only about publication counts, accessibility, dissemination, ethics, prestige, jobs, cvs, and most everything else by which we are evaluated.

However, I also want to let you know that the majority of the 260 votes were in favor of LIPIcs. EATCS will observe the further development carefully.

So at least we know the opinion of those EATCS member who care. Next time we just need to remember to inform intelligent adults of the importance to actually vote.