Henrik Olesen, from Some Illustrations to the life of Alan Turing

On Wednesday, 19 January 2011, I will give a general audience talk about Alan Turing at Malmö Konsthall, a contemporary art museum.

The occasion is a current exhibition of Henrik Olesen, one of Denmark’s most important contemporary artists according to the programme.

My presentation is based on a talk I gave in the Fall 2010 Teknik- och Naturvetarcirkeln for Folkuniversitetet, but for the art museum I tone down the technical aspects and instead build the talk around a presentation of verious artworks featuring Turing, including:

There is more, including theatre plays, stamps, and scientific and political awards.

During 2010 I have been involved in the production of a TV programme about algorithms, in particular Google’s PageRank. It went online just a few hours ago:

I just sat through the gruelling task of watching myself.

The background is that IT University of Copenhagen, like all Danish Universities, has agreed to produce popular science content for the Danish public service broadcasting corporation DR. Thus, the show will be aired on the Danish TV channel DR2 some time during 2011. For now, it’s online at ITU’s own digital channel ITView. It’s all in Danish, of course.

The part I like best, and which took the longest time and most passion to think about and produce, is in the middle. The conceit is that the PageRank algorithm could have been invented in the Middle Ages and used by the Catholic church to rank books instead of web pages. 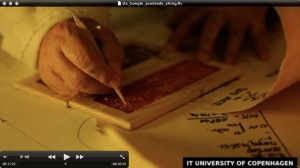 So we shot some scenes with monks in an old monastery who executed the algorithm by hand, using quill and paper. Actually seeing the finished scenes made my day today. It looks great, thanks to the people involved in actually filming this. I take endless joy from seeing authentic-looking monks drawing directed graphs and pretending to compute eigenvectors.

If you look closely, in the still you can see a drawing that looks suspiciously like figure 2 from “Authoritative sources in a hyperlinked environment” (Jon Kleinberg, J ACM 46(5): 604-632 (1999)). The programme is mainly about the PageRank algorithm of Brin and Page, but I like to imagine that the clever monks have active research in alternative ranking algorithms.