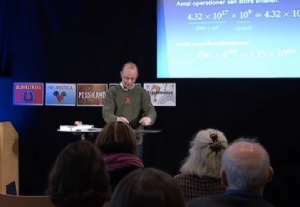 In March 2012 Swedish TV recorded a popular science lecture of mine. It is now online.

I am an eager public speaker and have several crowd-pleasing talks that I can take off the shelf, say about how Google works. In March, I had the opportunity to record a lecture for Swedish TV’s educational channel Utbildningsradion. That audience is as “general” as it gets, so I wanted it to be broad and accessible. Something everybody immediately relates to. Something concrete and tangible.

What better choice than separation results for nonderministic polynomial-time computation? That’s right! In a fit of misguided ambition I decided to make a 20 minutes talks about honest-to-Karp theory of computation. P versus NP. Also, I did it in my fourth language: Swedish.

I haven’t had the guts to watch it yet, maybe I never will. But as far as I remember, it came out well.

In summary, the Singularity! is far. But then, the time-travelling nanobots paid me to say that, promising me a simulated eternity filled with cybervixens and Nutella.

Edit to add: I have been informed that I shouldn’t say “NP-hårt” in Swedish, but “NP-svårt.” Thanks, these things are beyond my linguistic intuition.